Is It Good and Healthy If Women Are Muscular?

Wednesday, December 23, 2020 Add Comment Edit
M.OHANG - Is It Good and Healthy If Women Are Muscular?, Having stocky muscles is the desire of most men. But, it's not uncommon for women to want it and even someone has managed to have it.
Stocky muscles are synonymous with strong, healthy, and fit body shape. However, is it normal for women to have big, stocky muscles like men? Is it healthy and Good for the Body? 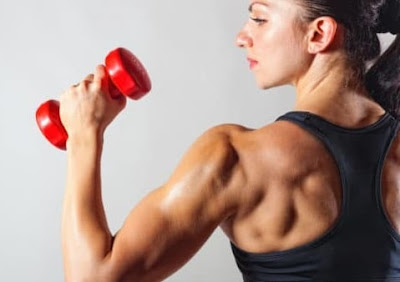 Is it normal for women to have stocky muscles?

You can also have hard and strong muscles like your partner. But, unfortunately, you can not equate the strength and size of your muscles with men. Because this is related to the function of the body as well as the levels of hormones that each woman and man have. Women tend to have higher levels of body fat than men.
In a normal woman, her body fat amount is about 20-25% of her total body weight. While the male body only contains an average of 10-15% fat. The fat in female athletes is still more, which is about 8% of the fat in male athletes which is only 4% only.
So, to make those fats into stocky muscles, you have to work extra hard. And it is less advisable. The woman still needs fat levels in her body and is indispensable when she gives birth and breastfeeds later.
After all, a woman's physical endurance is also below that of a man, thus making the woman unable to match the shape of her muscles. Therefore, women have to work several times as much to get stocky and large muscles as men. And this, if not properly supervised and noticed, it could be that you are doing too hard exercise that is not good for health.

Then, can't a woman's muscles be formed?

Women's muscles can still be made tight and enlarged. But unlike men who quite easily raise him. The muscles that form in men are influenced also by the levels of the testosterone hormone they have.
The hormone testosterone makes it easier for a man to form and enlarge his muscles. When they do exercise, then this hormone will stimulate the brain to send protein to the muscles to make them bigger.
But don't worry, women also have testosterone hormones, certainly not as much as men. This can help the woman to make her muscles firmer and bigger. A study published in The Journal of Gerontology, states that the body response that occurs in men and women while undergoing training is almost the same.
The steps are taken to gain strong muscles in women, in fact almost the same as what men should do. When you want strong muscles, then you have to do it by raga rutin. Do not have to go to the gym, because doing sports 20-30 per day is done 3 times a week. You can do simple movements at home, such as squats, pushups, lunges, or you can also use light weights to get fast muscles.

This is my discussion this time about Is It Good and Healthy If Women Are Muscular? hopefully, this article can add to your insights, and if there is a wrong word or there is something less understood can ask in the comments column below thank you.

0 Response to "Is It Good and Healthy If Women Are Muscular?"