The Danger If You Exercise during the Day

M.OHANG - The Danger If You Exercise during the Day, Exercise is important for health. Even so, you also need to understand the right times to exercise. Because most people think that exercise during the day will burn more calories in the body so it is effective to lose weight.

It is not. Recent research says that exercise during the day is not effective and has health risks to look out for. 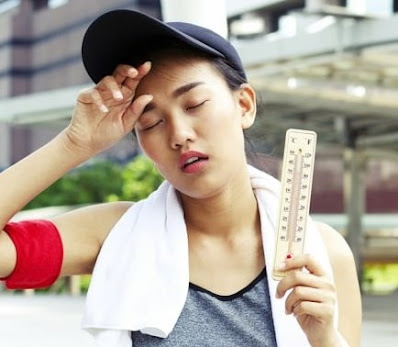 Exercise at high temperatures is not good for muscle performance

A study from the University of Nebraska at Omaha showed the dangers of doing outdoor exercise when temperatures are high can affect a certain amount of muscle performance at the cell level.

Researchers studied how exercise performed at different temperatures can affect muscle performance. More specifically, they looked at how mitochondria - energy generators in cells - are affected by various temperatures.

Mitochondria are organelles that play an important role in the function of cellular respiration of living beings. Well, when the mitochondria do not function properly, this will play a major role as one of the causes of obesity, diabetes, aging, and other conditions.

That's why the researchers wanted to know what is the optimal temperature for exercise, which could prevent mitochondrial dysfunction to potentially lower the level of the disease mentioned earlier.

The study was conducted by observing samples of thigh muscle tissue from each participant moments before and after completing an hour-long cycling exercise in a room that had different temperatures, one hot and one cold.

So, why is exercise during the day harmful to Health?

Michael Bergeron, a director at the Sanford Sports and Science Institute, said that sweltering daytime sports, where when temperatures are hot, humid, and not windy, make sweat unable to evaporate. This causes the body can not be effective in releasing heat produced by the body after performing physical activity.

Well, when the release of heat in the body is ineffective, the body temperature will rise to dangerous levels quickly. This is what will be harmful to your health.

In essence, exercise is carried out at high temperatures or heat, causing the body will have difficulty eliminating heat so that it causes the body temperature will increase. This is of course bad, as it can cause a variety of harmful impacts on health.

Here are some of the most common conditions that occur if you exercise at too high a temperature:

Exercise is good for overall health. It's just that you have to be smart to minimize all the risks to still get the health benefits offered from doing physical activity.

One way is to avoid doing sports when the sun exposure is too hot in broad daylight, wear comfortable and thin clothing, and use waterproof sunscreen regularly.

Besides, do not forget to meet the fluid needs before, during, and after exercise to avoid dehydration. Because, if the body is dehydrated, then the body will be more difficult to normalize the temperature again. This will certainly worsen your condition.

0 Response to "The Danger If You Exercise during the Day"